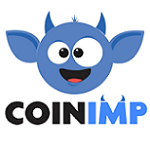 CoinIMP (IMP)
ICO
IMP is short for "Impression", a marketing term that indicates the number of times a particular piece of content is displayed without having the user perform an ...
Details